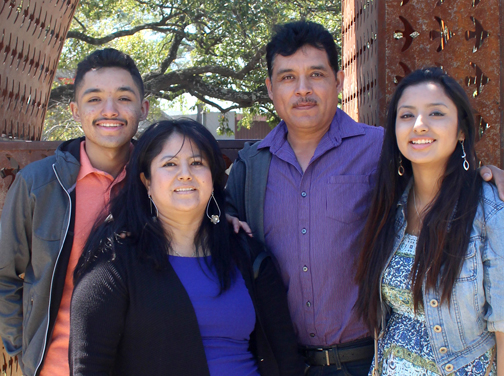 It started ten years ago when Maria and Pedro started sending their children, age 6 and 9, to a Mission Arlington® Bible Study. The parents did not care to attend, but they knew it was good for Yvonne and Eric to learn about God. But when Maria’s vision loss sent them to the emergency room, their lives changed in a dramatic way.

During that ER visit, the doctors found the brain tumor. Maria could not leave the hospital and stayed in intensive care for 3 months. After the swelling in her brain subsided, doctors tried to surgically remove the tumor. During the surgery, Pedro waited in the hospital, not sure if his wife would survive. No one was there to wait with him. He felt angry and alone.

Suddenly, someone he recognized showed up. They still do not know how this person knew when the surgery was nor how he walked in at just the right time, but the pastor from the Bible Study the children attended walked in just as the nurses had taken Maria back. He prayed with Pedro and sat with him for a while. Pedro says he felt so much peace when the pastor came. Maria came through the surgery and starting attending church faithfully the first Sunday she was able.

Maria says, “I felt so happy. I felt like I was part of family.” She knew many people at the church had prayed for her. She started singing on the praise team.

A year later, another tumor had formed – a different type. “The nightmare returned,” Maria says. But, surgery was not an immediate need. They could watch and wait, so that’s what they did for 7 years. Maria says the second surgery was different from the first. “There was pain, and some worry – but nothing like before. Because we were stronger? No. Because God works.”

It’s been a year and a half since the last surgery. Maria still has to have scans to check for any new tumors. Days are not always easy, but their family is united, and they have the love and support of their church, where they still faithfully attend. They all have a deeper relationship with God. Their daughter Yvonne says the experience taught her how to pray. “I didn’t really talk to God until then. And I found out he does listen to you. He has blessed us so much.”

Such beauty and growth from a life-threatening event can only come from God. We are so grateful for this faithful family.