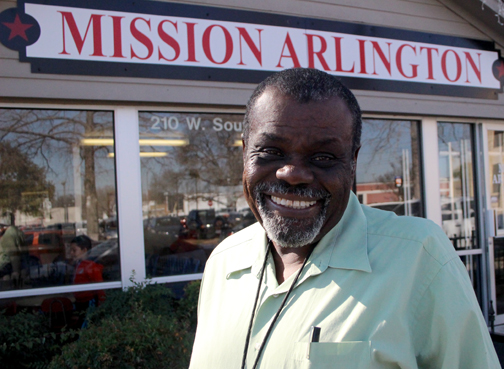 In 1994, James was pastoring a church 20 minutes away from Mission Arlington®, but he meet Tillie Burgin at a conference far away in south Texas. Tillie was the speaker, and everything she said touched James’ heart so profoundly, he began to respond from the back row, “Amen!” Afterwards, they realized they were practically neighbors. A ministerial connection, and a friendship, was born.

James wanted others to avoid the mistakes he had made when he began preaching and caring for people in the Woodhaven area of Fort Worth. His church gave away food and clothes to the surrounding neighborhood, so he felt at home at Mission Arlington® where he found people with the same heart.

The years have taken James across Fort Worth, into different ministerial roles, through medical issues, and past an amputated foot. For a year he literally had to be off his feet, but during his time of illness, the Lord showed him that he needed to get back to the people, back to serving on the ground. He says, “I do not want to punch my clock out of here and not be significant, not make a difference. Not by numbers but by impact.”

About a year ago, James found himself driving through Arlington, hurting, around 4:00 on a Sunday, which has been the time of the Mission Arlington® Worker’s meeting every week since 1986. He knew where to find his family. James slipped in the back of the meeting, crying, into open arms. After the meeting, Tillie told him to come visit during the week.

Since then, James has been as active as he can at Mission Arlington®. Despite continuing health concerns, he says he has to keep reaching out, ministering directly to the people. “I’m too old just to do church. I’m too old just to preach three points and a poem. I don’t want to leave without fulfilling God’s mission for my life.

Originally published in February of 2016.