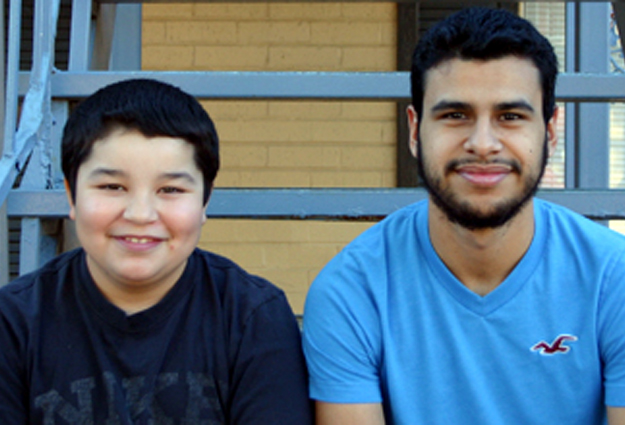 Two brothers, sitting on the steps of the apartment where their Mission Arlington church meets each Sunday.

As soon as Jesus could walk, he was volunteering for Mission Arlington®.  He would toddle around behind his Bible Study leader, Rebecca, and knock on the apartment doors to invite everyone to church.

Ricardo, Jesus’ older brother, has been attending Bible Study for years and, even though their family moved away from the apartments more than ten years ago, they still drive back every week because that’s their church.  They say they like the environment and love to learn about God.

Some may recognize these boys from previous Mission Arlington® publications. Rebecca always has her camera, so Jesus appeared in many newsletters as he grew up. Ricardo wrote an essay for school a few years ago about the work they do on Fridays, which was published as well. Read the essay here. Last year, Rebecca wrote a piece about Ricardo and his friend that was featured on this website. Find that article here.

Ricardo’s working on his college degree now, and says he uses the things he learns at church in his everyday life. “Everything I’ve learned, I’ve put in into my life.  There are things I’m still working on to change with the help of God.” And while at school, he shares his faith whenever he can.  His goal? He wants “to show people that their life can be full of hope.”

Jesus is in junior high, While this is difficult territory, Jesus says he has a plan. “Always keep going forward and make better choices. There is another way of life.”

Mission Arlington ® is so much more than clothes, food, and Sunday morning Bible Study.  Those things work together towards the overarching goal of investing in lives to further God’s kingdom.  Ricardo and Jesus are just two of many who are following Christ, and we praise God for the work he is doing in their lives today.